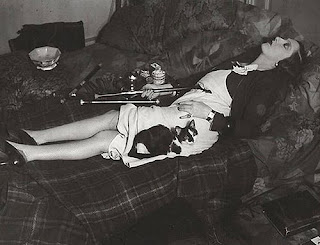 Yves Saint Laurent launched its best-selling fragrance Opium, in 1977. It was one of the big iconic perfumes of the 80s, a fragrance that signified exoticism, mystery, danger and sensuality. Its popularity and its decadent scent trail inexorably led to a backlash against heady perfumes that I think we're still recovering from.


Belle d'Opium opens with white pepper, a hint of peach and some sandalwood from the base showing through. The heart of the perfume revolves around what they refer to as the "Nargileh accord" and incense. Nargileh is a tobacco water pipe (hookah is basically the same thing), like I described in Fumerie Turque. But I don't smell tobacco in Belle d'Opium. Instead the idea of a lazy curling column of smoke has been created with a smoky note that smells like a just-snuffed candle, with a touch of incense weaving through it. The bottle hints at this candle aspect with a red wick running through the middle.

Although "Casablanca Lily" is the flower that the marketing focuses on, I don't really smell lily either, which is a good thing by me.  Lily is one of the new "it" notes this season but not one of my favourite flowers. Belle d'Opium has a quiet, well-blended white floral bouquet, quite demure and nondescript actually, supporting the curling smoke heart. It's almost as if the fat, waxy petals of those flowers translate into the waxiness of white candles. The base is a musky wood with patchouli - pretty much the ubiquitous "new chypre" base.


Belle d'Opium is fairly quiet, staying close to the skin (unlike the original) and fading after a few hours. I'm disappointed that Belle d'Opium, with such a delicious list of notes, and marketing that promises an "overdose" of ingredients, is so tame to me, but that seems to be the way that the big main-stream perfumes are done these days. Truly "indecent" perfumes, or perfumes that dare to have sillage, still can only be found in the smaller niche lines.

But Belle d'Opium is pretty. I like wearing it. If I could get a big bottle inexpensively, I could see spraying this on liberally in the cooler months. I like to relax in those long dark evenings with candles burning and a cashmere wrap for cuddling. Belle d'Opium would be a good comfort scent for those casual evenings, shut away from the rest of the world, lolling about on the couch. Not unlike an opium den, actually. 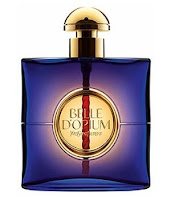 
Photo: One of a series of photographs by Hungarian photojournalist Brassaï taken in Paris in the early 1930s. Via stevechasmar.
Posted by Unknown at 4:31 AM