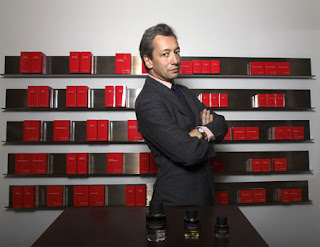 Yesterday evening  I attended a talk given by Frederic Malle at Holt Renfew. If you don't know already, M. Malle is the genius behind Federic Malle, Editions de Parfums, a luxury line of perfumes by master perfumers.

It was an intimate setting with were just about 10 of us in the room but there were some familiar faces: Kay and Gwen from Perfume Niche were there as well. We sat in a close circle of tables, decorated with peony centre pieces, in a room scented by one of the candles from Malle's collection, Un Gardenia, la nuit, by Dominique Ropion, which was lovely.

I don't know if you remember, but a little while ago M. Malle made a comment to the press about the perfume world being filled with hysterical "nerds." It rubbed a few of us perfumistas the wrong way. Probably because it's close to the truth. I am totally a perfume nerd. Anyway, I was half expected M. Malle to be somewhat pompous, or distantly elite at this seminar, but I was pleasantly surprised. He was completely charming. He comes across as a cultured Parisien certainly, he has a pedigreed heritage (his grandfather worked with Dior). But he was also friendly, approachable and utterly generous with his time. He spoke for more than an hour and a half and answered all questions enthusiastically, and this after a full day of speaking while suffering from a cold. He talked to us so long that we had to stop him because we were afraid he would miss his flight, and yet still he took two more questions. (I hope he made it.)

He began by speaking about how he started the company and why it was special. The idea came out of a dissatisfaction with the state of the perfume industry 11 years ago. All the perfume was being manufactured by large firms and mass marketed to the public by celebrity faces. The real artists behind perfume, the perfumers who worked for the labs, were being kept anonymous and were constrained by having to design perfumes to the specifications of marketers, who only wanted to please the largest number of people. M. Malle found that all the people he knew in Paris were not even wearing perfume anymore, so bored had they become with the current perfumes for sale.

He had the idea of making and selling perfumes like fine art prints. Each perfume would be a unique work of art and it would be signed by the artist, the actual perfumer (or "nose") who created the perfume.

I'll write more about M. Malle's talk, and some of the questions he answered for me, (like how he feels about the IFRA restrictions!) in another post. For now, you can watch the video below where he tells the story of the creation of Editions de Parfums. 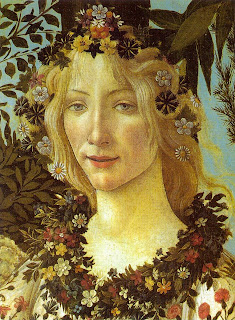 The Puredistance company prefers not to release lists of notes for its perfumes, preferring that we experience the scents as a whole rather than focusing on the individual pieces. This was a challenge for me.

Normally, part of my enjoyment of a perfume is the aromatic sleuthing I do - the teasing out of individual notes of a perfume, so that I understand the story it is trying to tell me. I love the "aha" moment when I recognize a particular note and appreciate how it's been used in this perfumes as compared to others that I've smelled. But that's just the "perfume nerd" in me.

Most people enjoy a perfume as a complete experience, not as an analytical exercise. And maybe they're right. Perfume as art isn't about the brush strokes, it's about the personality of the perfume and if it speaks to you or not. Here's what Antonia had to say to me:

Antonia is a green floral of great beauty. Wearing Antonia is like walking through an orchard in bloom on a warm afternoon. The trees are buzzing with bees and the sun turns the leaves and flowers into a dance of green and gold.

This green floral is not dry, like the chypres I've reviewed lately, but warm and sweet. It more like a seamless blend of green and floral and oriental. It's soft, never loud, but it's also quite strong with good sillage. The perfume contains 25% perfume oils. It's expensive and difficult to find in Canada, but if you fall in love you can order it online.

If Antonia was a season, she would be late spring becoming early summer. If she was a person, she would be a young woman. Antonia is kind and pretty. That's how I experienced it. (But, nerd that I am, I couldn't resist trying to list out some notes below.) 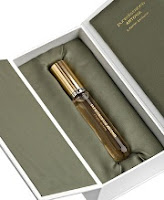