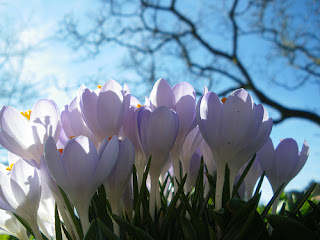 A lady for spring


In her private office, Mrs. Lauder kept a collection of the rarest, best and most expensive fragrance oils, extracts and essences from every corner of the globe. Over several years, she created a parfum from these precious ingredients that was deeply personal and for herself alone. It was a vision come true of her belief that she, like every woman, deserved the best. One drop and you'll know why Estée Lauder kept it for herself. - From the Estée Lauder web site

In 1973 Estée Lauder finally released Private Collection to the public. It was a hit and Grace Kelly reportedly wore it.

Private Collection is a gorgeous green/floral chypre and perfect for the spring. It opens with a duet of sweet  blossoms and bitter moss. I immediately get the impression of the first flowers of spring struggling to break through the ground. In the heart, I smell green grass and spicy-sharp hyacinths when I sniff closely, but from far away the dominant notes are powdery, earthy and tinged with a dark green pine note. It's a walk in the park in early spring scent. The whole thing is well-blended, smooth and lady like.

I adore Private Collection and when my mini runs out I think I'll buy a full bottle. Unlike some of my other green chypre loves, you can still get this gem today and at a reasonable price. 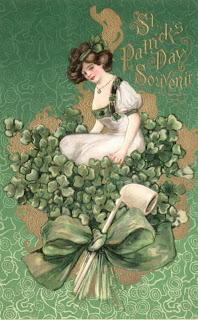 Happy St Patrick's Day everyone! Being of Irish descent on my mother's side, we always wore green on March 17 and went to the parade. No one is more sentimental about Ireland than an Irish-Canadian on St Patrick's Day, and we're not even Catholic. I love St Patrick's day even more now that it's been almost universally adopted as a spring celebration. I go to the Parade in Toronto and see so many people of different colours and nationalities cheerfully wearing green clovers.

A few days ago, planning this St. Patrick's Day post, I chose to review Émeraude. I've been focusing on green perfumes this month, and I hadn't even tried my vintage bottle yet. Full of anticipation, I took off the cap, sprayed and thought... "Huh, Émeraude isn't green at all." Surprise! It's an oriental.

That's what I get for not reading other reviews first. Created by Francois Coty, the founder of Coty, Émeraude was released in 1921. Its citrus top and creamy vanilla plus wood base predates the much more famous Shalimar. Although Shalimar is the critical darling of the perfume world, I'm still not comfortable with it. I prefer my Émeraude.

My bottle is vintage edc. I'm not sure of the date, but I would guess that this was a drug store tester bottle from the 60's or 70's. It opens with a hint of citrus, but nothing like the strong lemon I get from Shalimar. the heart of the perfume opens quickly, within a few minutes I am smelling a powdery, creamy rose and jasmine blend over a vanilla amber and wood base. It's very smooth and, because it's only an edc, not very strong, but it's lovely. The base notes are slightly musky and leathery. In the far dry down, the wood notes reveal sweet violet tones.

I find Émeraude pretty and comforting, if the teensiest bit "old lady." I've never smelled the current formulation but I can recommend the vintage. I'll have a photo of my bottle up later today.

House: Coty
Nose: Francois Coty
Notes: Top notes are orange, bergamot and lemon; middle notes are jasmine, ylang-ylang, rose and brazilian rosewood; base notes are amber, sandalwood, patchouli, opoponax, benzoin and vanilla.
Where to buy: I got my vintage bottle at Fritsch's Pharmacy
Posted by Unknown at 1:36 PM 5 comments: 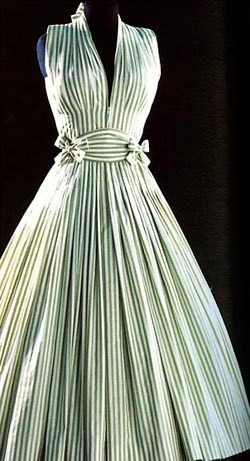 The couture house of Carven was founded in 1945 by Madame Carven. She was a novice in the industry, but soon became much sought after for her clean, fresh designs that epitomized French chic. Ma Griffe, which roughly translates as my signature, was released in 1946 and was named for Carven's signature green and white striped dress. The box design is still patterned in green and white.

Ma Griffe is a green chypre, but one that leans more towards a floral than the dry greeness of Givenchy III or Silences. It opens with aldehydes and citrus and blooms into a sheer, light gardenia with green notes. An interesting hint of cinnamon accents the gardenia and the whole thing dries down to a cinnamon and wood, resiny base.

I have the modern bottle, and I have a vintage sample, but unfortunately the top notes in the vintage have gone sour. The base notes are still there however, and it seems to me that the labdanum and styrax were much stronger notes once. There is an almost incense quality to the vintage.

I think Madame Carven wanted something that combined freshness with self-confidence, like her dress design. It was a perfume to appeal to the new working girls, making their own money and their own way in the world after the war.

Something else was released in 1946 that put a spotlight on the new post-war, independent woman. The Big Sleep, by Howard Hawkes is as dark, rainy and complicated as Ma Griffe is light and playful, but its beautiful, sexually-confident young women remind me of Ma Griffe. 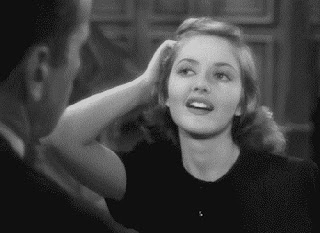 First is the troubled Carmen Sternwood, the sexually-agressive opium addict, victim of a pornography ring and possible murderer. She uses sex automatically with men, to get her way. After her first meeting with Marlowe, he observes drily "She tried to sit on my lap while I was standing up." 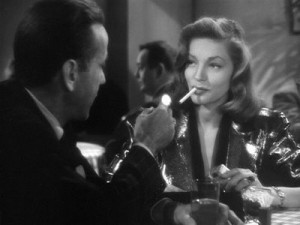 Then there's the star, Lauren Bacall as the sultry sister Vivian Sternwood Rutledge. A young widow, presumably from the war, Vivian is sexy, mysterious and, though Bacall was only 20 at the time, she always seems in control. Humphrey Bogart fell for her hard, both in real life and in the movie. Vivian plays a dangerous game trying to keep her sister and herself out of trouble from black mailers, pornographers, gamblers and thugs while keeping it all a secret from private investigator Marlowe (Bogart). Their sexually suggestive "racehorse" scene in the movie was just about as racy as dialogue between a man and a woman could get at that time. And just look at that gorgeous lamé jacket. 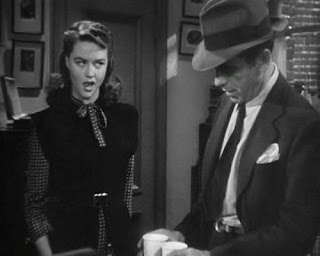 Besides those two leading ladies, the movie is full of strong, sexy women. There's my favourite supporting role ever, the bookstore proprietress, played by Dorothy Malone. Bogart steps into her shop to watch the store across the street, but quickly charms her. As a heavy rain begins to fall, he proposes that they have a drink of rye (from a bottle in his pocket) while he waits - with a suggestive line: "I'd rather get wet in here." The independent bookseller pulls the shade and closes an hour early, removes her eyeglasses and lets her hair down coyly: "It looks like we're closed for the rest of the afternoon." There are many femme fatales in film noir, but this sexy-geek librarian is priceless. 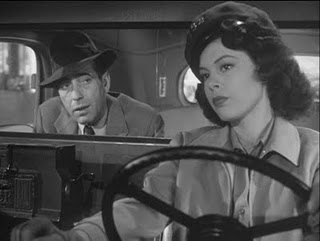 Even the taxi cab driver in The Big Sleep is a little randy.

Anyway, sorry for the long non-perfume-related post. If you've never seen The Big Sleep, I highly recommend you run out and get it right away. And maybe spritz on a little Ma Griffe while watching, to get the real authentic experience. 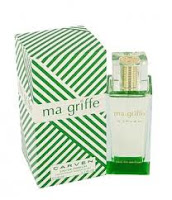 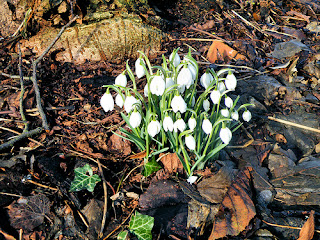 Do you believe in practical magic? Can we bring about the warmer weather by wearing perfume that is evocative of spring? Continuing my one woman protest against the snow still on the ground, I have another green perfume to recommend: Givenchy III.

Released in 1970, Givenchy III is a dry and elegant green chypre. It starts with sparkling aldehydes and leafy green galbanum. A sunny hint of peach balances the galbanum's bitterness. The heart is a slightly powdery, white bouquet with a green lily of the valley. The florals are kept dry, not sweet, by the addition of hyacinth and iris. The base notes are lovely smooth woods; slightly earthy and mossy.

Givenchy III feels like finding a patch of snowdrops on the mossy floor of the woods in Spring. It's a ray of sunshine and hope in the winter gloom.

Note: My bottle is a vintage tester I bought from Fritsch's Pharmacy. I'm not sure what year it is, but it looks like the photo below. It has the best spray of any bottle I own. A nice, fine mist. 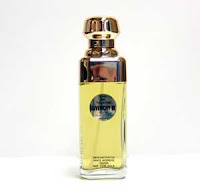 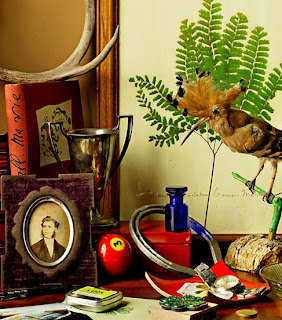 The luck of the Irish all day long

To celebrate March, the green month, and the upcoming hootenanny that is St. Patrick's day, I am wearing Atelier Cologne's Trèfle Pur today. I feel the need for green to get me through what is usually a not-so green month in Ontario. And a little four-leaf clover luck wouldn't hurt either.

A burst of freshness perked me up right away when I dabbed on Trèfle Pur. A "cologne absolute," Trèfle Pur contains 18% essential oils, which makes is much longer lasting than traditional colognes and it has better sillage. It was love at first sniff. Trèfle Pur is amazing and I only wish that I hadn't waited almost a year to try my sample.

Atelier Cologne only just started in 2010. Trèfle Pur is one of 6 perfumes they offer. To me, Trèfle Pur is an example of the best of modern perfumery. High quality, an interesting composition, and a sheer touch that lets all the notes shine individually yet also combine into a harmonious whole, are some of the hallmarks of the great modern perfume. I love being able to pick out the individual smells of bitter orange, violet leaf, and  neroli, even as they work together like voices in a choir.

Trèfle Pur starts like a sunrise over green fields and winds up in the soft grey dusk, The opening notes combine a bright bitter orange with a green grassy note. The gorgeous green of the cologne comes from clover absolute, and the spicy greeness of violet leaves and basil. As it warms on the skin, wafts of aromatic cardamom and and a lovely floral neroli lift the green off my skin and swirl around me, like an afternoon in a garden. In the dry down, a cuddly musk and a grey mossy feeling comfort me.

Trèfle Pur is almost a combination of two of my favourite Frederic Malle perfumes, Bigarade Concentrée and Angéliques sous le pluie. It has the beautiful bitter orange opening of Bigarade and the spicy, musky, greeness of Angéliques. It is perfect for men and women who are looking for something fresh and green.

I also appreciate the way Trèfle Pur seems to tell a story and set a mood. It creates an olfactory image, a character, that each person can make their own. The marketing images created for each cologne in the collection reflect this story-telling aspect of the perfume. You can see the example for Trèfle Pur, above. I love them; I think they are some of the best perfume ads I've ever seen.