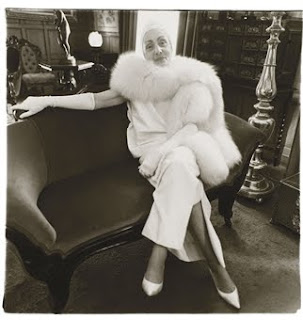 A once beautiful woman

Cabochard, the first perfume from the fashion house of Grès, was released in 1959 and had it's 50th anniversary in 2009. I've never smelled the original juice, just the modern bottle I bought this year in a discount store. It's too bad. Luca Turin, in Perfumes, The Guide, says "Cabochard was once the greatest leather chypre of all."

One of the things I find most interesting in the history of Cabochard is that Madame Grès originally wanted to release a lighter, floral perfume, but was convinced to go with the leathery, green-chypre because the more popular perfumes then on the market were stronger, like Bandit. What a change from the way things are today! How I wish that things were now as they were then and more perfumes like Cabochard were being released.

Cabochard uses the same chemical, isobutyl quinoline, to create its leather note that Bandit and Cuir de Russie both use.  In Cabochard, the leather is much softer and  it has less (almost no discernable) oakmoss. I like the soft tobacco and leather notes that I catch in my sillage, but these two notes seem to hover over a green base that, when I sniff closely, is thin and a little synthetic smelling.

My husband says he smells dandelions, which I think means he is smelling the tobacco and green notes, combined to make him think of sweet green weeds.

I don't think it's bad. I'd rather wear it than any of the water lily, peony, melon perfumes on the market, and most of the patchroses as well. But Cabochard is not as wickedly beautiful as it must once have been.

Photo: Madame Alix Grès, for Harper's Bazaar, February 1964
Posted by Unknown at 5:09 AM