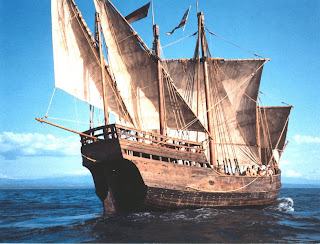 Take a voyage on a spice ship

The Frapin family has been creating wines and cognac in France since 1270, through 20 generations. It may seem odd at first, that the company started a line of perfumes, but there are many similarities between Cognac and perfume. Both share a long, proud history in France; both rely on the skill and creativity of great craftsmen; and both represent the ideal of luxury and physical pleasure. Also, the quality of both depends on the quality of their ingredients. In the far history of perfume, those ingredients were often imported from far away by explorers and traders.

Caravelle  Epicée recalls the voyages of the spice trader ships of the 15th and 16th centuries. The caravel was a vessel of great importance at this time, developed in Iberia it was used by Portuguese and Spanish explorers along the west coast of Africa and in numerous voyages around South Africa in attempts to reach India. It was also used to cross the Atlantic - the Nina and the Pinta of Christopher Columbus's famous voyage to the new world were most probably caravels.

The perfume opens with a big blast of spices, like walking in the hold of a ship filled with barrels of precious ingredients from exotic lands. The spices are dry and hot, with a lot of cumin, nutmeg and pepper. I also smell smoky wood, which makes me imaging the barrels themselves and the planks of the ship. After the initial desert wind of spices, a boozy vanilla note can be detected - maybe a barrel of finely distilled spirits is on this voyage as well.

If Caravelle  Epicée stayed with those notes I would be ordering a bottle today, but alas, it does some other strange things on my skin. I want it to be a cozy cashmere blanket, and it insists on being a bracing day on a rough sea. There is a slightly sour, dill pickle note that pops up on me when I'm least expecting it. And it has a very salty quality in the drydown that, while perfectly appropriate for a sea-going vessel, is not so much what I'm looking for in a perfume.

I'd like to smell Caravelle  Epicée on a man, I think it might be amazing in a pirate sort of way. 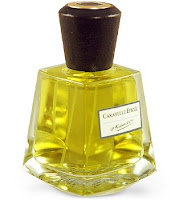