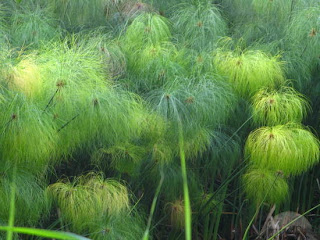 I first tried Papyrus de Ciane in 2010 and was unimpressed. Oh what a difference a year makes. Papyrus de Ciane is my new obsession. It is everything. It is all I am wearing and all I want to smell. It is perfect on men and women; the anti-pink perfume.

The Ciane is a river in southern Sicily where the only wild papyrus flourishes. The area is the largest wild growth of papyrus in EuropeNo one knows who brought the plants there. Were they presents from Ptolemy II to King Hiero of Syracuse or were they brought later by Greeks, Romans or Arabs?

Mythology has it that it was on this spot that Pluto opened a passage to Hades and kidnapped poor Persephone down into the underworld. Her bereft playmate, the nymph Cyane, mourned her so much that she literally cried herself a river. In the 19th century, it was as de rigueur for young Europeans to take a boat to the source of the Ciane on their Grand Tour as it was to visit Il Duomo or any Roman ruin.  They would float in wooden rowboats among the reeds that rose six feet tall, just like on the Nile, and contemplate romantic stories of the Greek gods.


Pierre Guillaume has created an intense green perfume to celebrate these intense green plumes. He also create it to be a modern interpretation of the legendary perfume base "Mousse de Saxe."

Mousse de Saxe is a dark, sweet mossy-woody accord with green freshness and a deep powdery drydown. According to Octavian Coifan, the original was created by Marie Thérèse de Laire in the early 20th century. It was meant to provide a moss or chypre base note to perfumes. On Bois de Jasmine I learn that Ernest Daltroff of Caron used a dark mossy base accord of geranium, licorice, leather, iodine, and vanillin that was called Mousse de Saxe. Whatever it's origin, Mousse de Saxe was used in or referenced by such great perfumes as Nuit de Noel, Habanita, Bois des Iles and Chanel No. 19. And now the name Mousse de Saxe belongs to Pierre Guillaume, because it lapsed into the public domain and was bought by Parfumerie Generale.

In Papyrus de Ciane, Pierre Guillame has taken out the sweetness and turned up the green. It opens with a bright, bitter green note. Gods, it is so bitter; I adore it. If you love the biting galbanum of vintage Bandit or Chanel No. 19, wait till you get a load of this.

With the green, sinking down to dark depths like the pool surrounding the reeds, are grassy vetiver-like notes, sheer woody notes and smoky incense-like notes. A soft mossy base cushions your landing.

Like the vintage perfumes, Papyrus de Ciane has personality and real depth but it contemplates the historic base but from a thoroughly modern perspective. They layers are sheer, the colours distinct. It's close to the skin and very wearable.

According to a Grain de musc interview, Pierre Guillaume composes his perfumes to be loved. Baby, it's working. 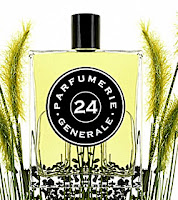