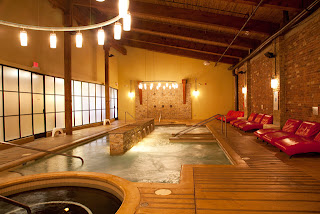 A day at the spa

Created in 2008 by the talented Olivia Giacobetti, Elixer is a modern interpretation of the Penhaligon's classic Hammam Bouquet which was composed by William Penhaligon in 1872. While Hammam Bouquet was inspired by the smell of Turkish baths, the modern Elixer reminds me of a particular spa.

Near where I live is a water spa. Finished in warm wood and low, ochre-coloured lighting, it's a wonderful relaxing place to spend a couple of hours, sitting under waterfalls, meditating in the sauna, breathing the eucalyptus steam in the steam room, and generally wallowing in sybaritic pleasure. While lounging on poolside couches to catch your breath, kind women will bring you steaming cups of chai tea.

Elixer captures the experience of going to that spa perfectly. A warm, dry combination of woods, particularly cedar, and incense remind me of a sauna in much the same way as Hinoki does. A touch of eucalyptus is like inhaling the vapour in the steam room. The spices, cinnamon, mace and cardamom, along with a touch of vanilla, remind me of the chai tea. Although it's unlikely that Giacobetti has been to my spa, Elixer is an uncanny recreation of that place. Brava. 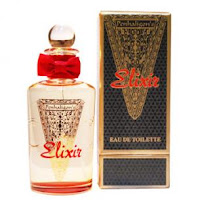 Full disclosure: I won my bottle of Elixer in a contest on Penhaligon's Facebook page.
Posted by Unknown at 9:13 AM